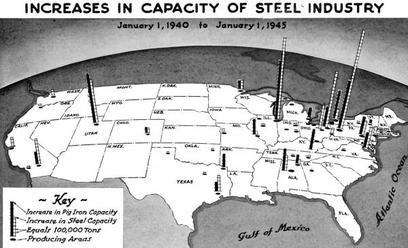 PA had some of the highest production of steel and pig iron during WWII.
LIke many places in America, Pennsylvania mobilized for the war in a big way. PA citizens planted "victory gardens" in order to grow their own vegetables and prevent food shortages. They collected scrap metal to be recycled into new airplanes or battleships. They underwent the same rationing and propaganda as everyone else. However, unlike other states, a good deal of the Pennsylvania population (proportionally to other states) was Quaker, or German pietist, and therefore conscientious objectors to war. Thus, to avoid being drafted, they took important positions in hospitals or on farms.

Pennsylvania was an industrial center, especially for steel production -- and Lt. Eugenedes' home, Pittsburgh, was one of the biggest steel-manufacturing cities in the entire country at the time. Pennsylvania alone produced one third of the country's steel at the time and one fifth of the entire world's supply. 41% of U.S. steel at the time was produced within a half an hour train ride of Pittsburgh, and about half of the $64 billion rise the state saw in income was due to metal or metal-related products. The only city in the U.S. that rivalled Pittsburgh's increase in steel capacity over the course of the war was  Other manufacturing branches, from warships to radios, benefitted as well -- though none quite so much as the metal industry. In general, the Commonwealth, as an industrialized state, profited immensely in all respects from the industrial boom that came in the wake of war.

One of the defining features of the Commonwealth of Pennsylvania is the contrast of its urban centers in Pittsburgh and Philadelphia with an otherwise largely rural population. During WWII, many rural Pennsylvanians moved closer to these industrial hubs in order to take advantage of the plethora of jobs made available by the incredibly high demand of the war effort. This migration included not only Pennsylvanians, but also migrants from the South, including many African Americans, which led to an unusually high concentration of African Americans in Pennsylvania cities. Pittsburgh's black population increased by half over the course of the War due to the highly-desirable manufacturing jobs that were most prevalent in this city.